UPDATE: As of posting this, it had worked for me once. But as of this summer, this has now worked for me TWICE. Both times with a European airline, both times leaving Europe. When I left from the States both times, it was a hard, “Nope”.

I have taken at least two transatlantic flights a year for the past seven years. I’ve always travelled alone, been on time for my flights, signed up for all the frequent flyer programs imaginable, crossed my fingers, toes, and all other extremities. Despite these measures, I have never, ever, been offered an upgrade. Every time I arrive to the gate I tell myself, this is it, this is the time they are going to call “Ms Emily Woerfel” to the counter and explain that I’ve been moved to first class.  As previously explained, this never happens and I am inevitably lodged among either a) thirteen newborns b) teething toddlers who kick my seat for eight hours c) students on a study abroad trip, or perhaps the worst of all d) that one person who thinks they own the arm rest.  Of course, I drink my mediocre wine and eat my sulfite-filled chicken product, watch four movies, and eight hours later I’m home and can recount all my travel horrors to my family. This has been my travel experience and I accept it.  I even find it amusing, though definitely not as amusing as my family finds it. They barely finish hugging me and are asking about the latest episode in Emily’s adventures in economy class.

Then, this past December on my way back to Wisconsin, and after a flight whose turbulence nearly made me soil myself, my luck changed. When they opened boarding for First Class and Business members, I showed my passport, breezed through the doors of the plane in what felt like slow motion, and turned…left. For those of you who don’t fly transatlantically often, this is the direction that the sheiks and business moguls go on an airplane. Not poor twenty-something English teachers.

I turned the corner. I had finally arrived. And damn. Did it feel GOOD. 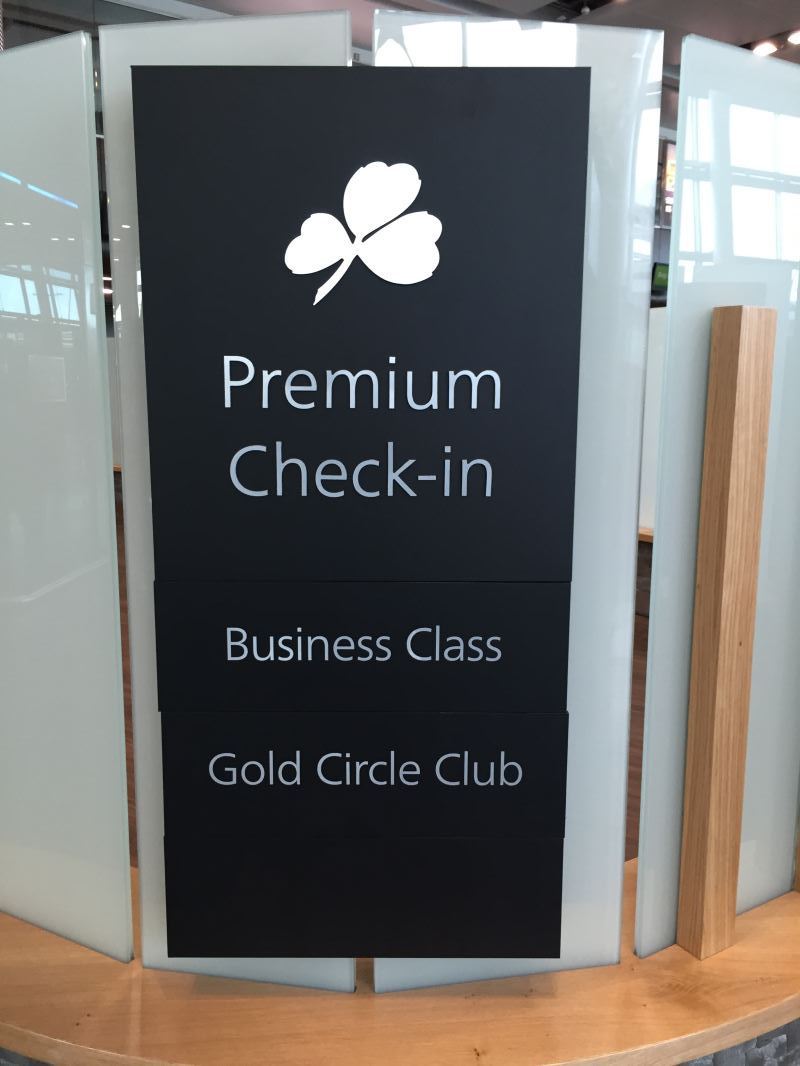 Maybe you’re imagining that I totally owned it, took my seat, drank one glass of wine, didn’t take pictures, and generally acted like I belonged there. I most certainly did not belong there and I was not about to act like I did. 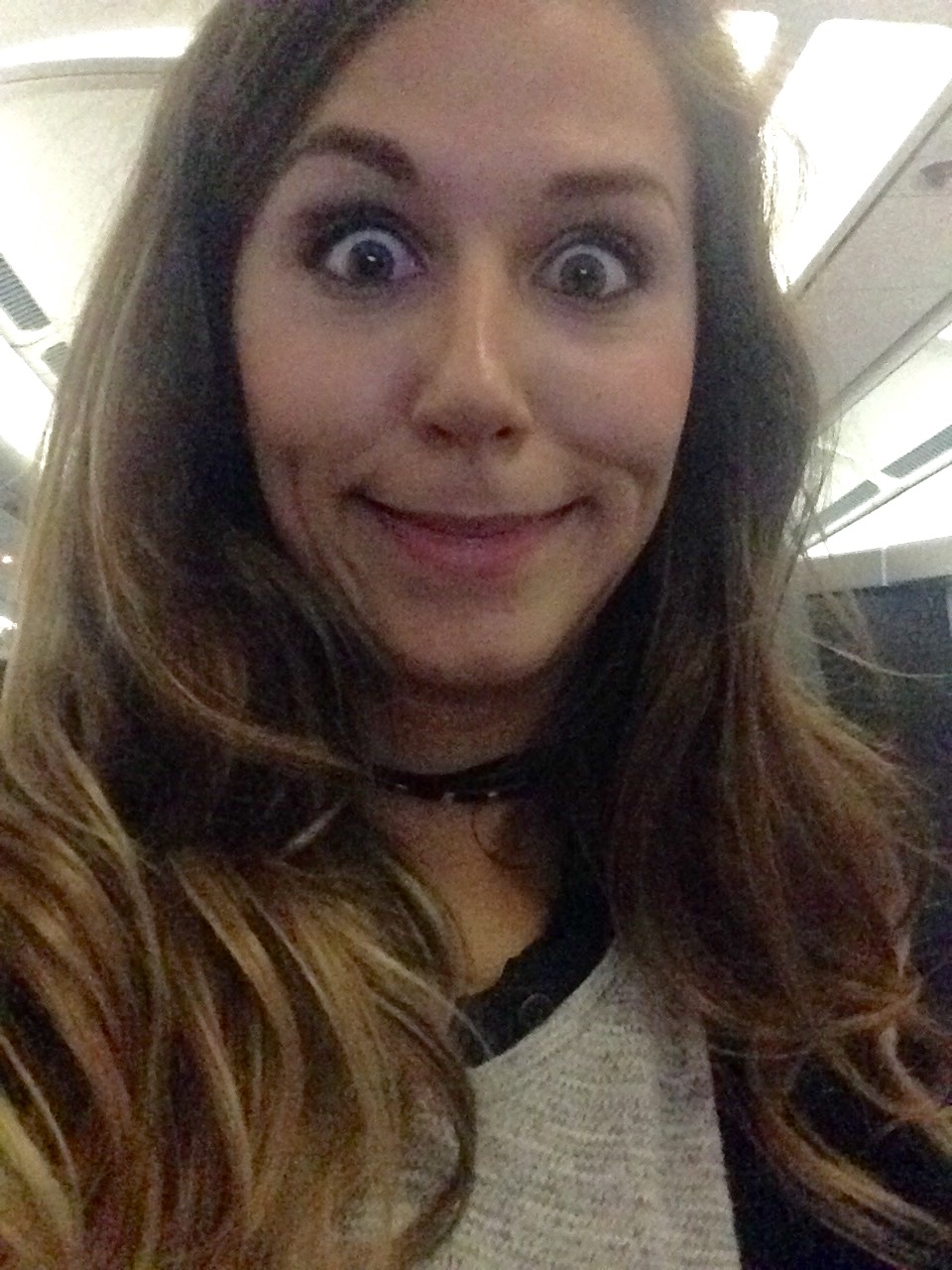 I toiled for a long time trying to find a filter to fix this picture. This is the best I could do. And yes, in answer to your question, Fergie’s “Glamorous” was playing in my head.

I got to my pod, (yes, my pod), and before I could sit down the flight attendant was asking if I wanted champagne. She then proceeded to show me my bag of designer toiletries, how to convert my chair into a bed, use the massage capabilities and reading light, and placed the gourmet menu for me to decide which dish I wanted. For a woman who is known for her resting bitch face, I don’t think I stopped smiling for the entire eight and a half hour trip. (The free and free flowing wine didn’t hurt either). 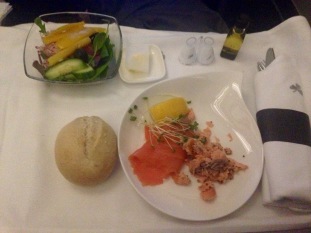 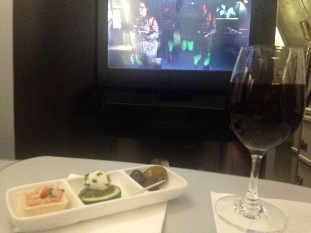 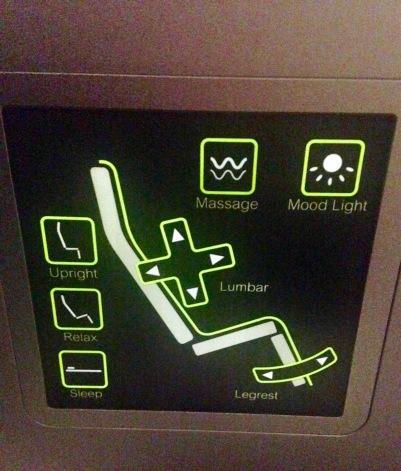 Quaint appetizers and cold smoked Irish salmon paired with a red wine (cause I don’t follow the rules), and my own personal massage therapist. Why get off the plane?

So, the question is, how did I do it? Was it all luck? The answer is no. I did my research beforehand, and the following tips are what I found most useful and crucial in my experience.

My mom always told us that flying on an airplane was a special experience that we should dress up for. I think this value is rapidly falling by the wayside, and I’m as guilty as anyone. Who wants to wear anything but stretch pants and a sweatshirt on an eight-hour flight? The thing is that Business and First Class are exclusive areas, with an image to upkeep. If an airline can help it, they would rather have smartly-dressed passengers occupying the seats to maintain this image. This doesn’t mean you have to go and buy a new outfit from Armani, but save the Spandex and sneakers for the gym.

This is completely out of your control, but it is the factor that is probably most in your favor. If an airline can bump up a few passengers to first class instead of paying them to stay behind in a hotel and re-scheduling their flight, they will do it.

The tactic I used, if you can call it that, only worked because I was flying out of that airline’s hub. (I flew Aer Lingus and my flight was out of Dublin). When I tried to do the same thing from Chicago to Dublin, it was impossible. They told me that even if they wanted to give me a first class spot, even in the case of overbooking, they could not because they are not the hub for Aer Lingus.  They explained that the only way of getting a first class ticket in this case would be to repurchase it for full price, (some 4,000-odd euros if you’re wondering) Maybe those of you who work for airlines can confirm the veracity of this. If you fly Iberia, try your luck in Madrid, if you fly KLM try it in Amsterdam…do a little research and know what you’re up against before they shoot you down.

When I went up to the desk at the gate, I was not expecting anything. Very unassumingly I asked sheepishly, “out of curiosity,” how much it would cost to upgrade my seat to first class. It was truly going to be a Christmas present for myself that I would do just once. (Because hell, after doing that flight nearly twenty times, I deserved it.) I am not convinced that had I simply gone up at asked for a free upgrade that she would have given it over so willingly. Those people have to deal with some of the world’s most entitled assholes and smile while they do it. Ask for the price of an upgrade, and worst-case scenario you say, “well, that’s my month’s salary so maybe next time”. No harm done.

This is a no-brainer, but you are much more likely to get an upgrade if it is only you that is travelling.

Though, the second time we managed to get it, Pepelu and I were together. He made a pretty great story about how he was going to meet my family for the first time and ask me to marry him. No ring yet but flying in Business Class was even better.

No explanation necessary. The early bird gets the worm.

Going on your honeymoon? Going home to surprise your family on Christmas Eve? Have a dying family member? Haven’t been home in ten years? Going to meet your biological father for the first time? You aren’t the only one. Every one who is travelling has a story to tell and I am willing to bet that airline employees have heard them all. Giving these details may not hurt your case, and as long as you keep number 4 in mind it might not be a bad idea to mention it, but it would be unusual for an airline to give you a first class spot solely because of it.

UPDATE: This is not necessarily true. As explained above, on our last trip to the States, Pepelu explained (with his adorable Spanish accent) about how he was going to propose to me when he met my family. Honestly, this worked pretty well, so if you manage to slide it into conversation, why not? Although I would still start just by asking about the price.

Remember what I said about airline employees dealing with entitled assholes all the time? I can tell you from personal customer service experience that there is nothing an employee enjoys more than telling you “there is nothing we can do” and basically telling you in the nicest way possible to shove it.  Complaining and expecting an upgrade because of a turbulent flight, bad food, or plane delays, will likely get you nowhere.

Perhaps one of the most sure-fire ways to get yourself up to business class is earning your way there, and one of the easiest ways to do that is by using certain credit cards that get you tons of miles. As of 2021, Money.com has come up with an extensive list of the year’s best credit cards for rewards, travel and otherwise.

The bottomline is there are no guaranteed ways to get a first class upgrade for free, and perhaps the most important factors are out of your control. But keeping these ideas in mind before your next long haul flight might just get you more leg-room, (and free champagne), than you bargained for.

Have you ever been upgraded to first class? What was the experience like? What do you think helped your case? If you use any of these tips on your next flight, be sure to write about it in the comments!

One thought on “How to get a first class upgrade…for free!”