If you’ve landed here, you are probably in a relationship with a Spaniard or European and considering, perhaps for visa purposes, perhaps not, whether doing a civil union, or pareja de hecho or just getting hitched is right for you. Here, I’ll lay out the similarities and differences between the two so you can decide which one is right. It should be established right from the get-go that both will allow you live and work in Spain for five years and obtain permanent residency after that. This is, of course, as long as either you or your partner are from Spain or another EU country.

Pictures in this somewhat dry post and for your viewing pleasure of our pre-wedding, wedding, and post-wedding are mostly from the incredibly talented Lele Pastor. Because being pareja de hecho for six years was awesome, but Spanish weddings are, honestly, la leche. 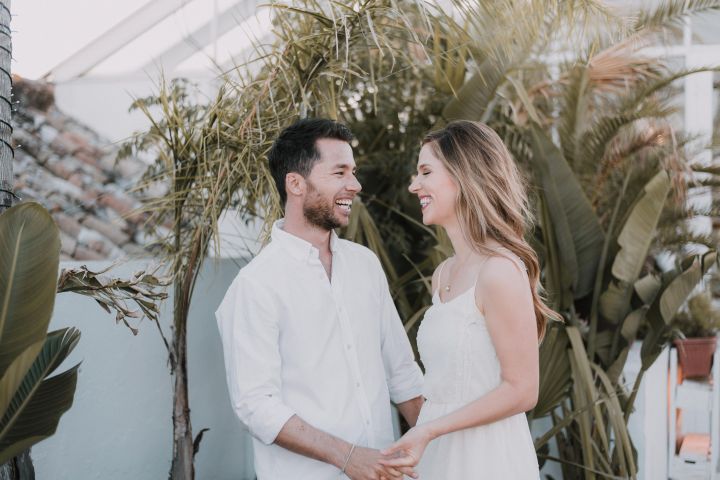 1. Divorce or break up

Yes let’s start with the fun stuff right away! God willing you won’t have to think about this, but it is a reality for many couples, and the difference is stark between those in civil unions and those who are married.

Civil unions simply sign a piece of paper dissolving their partnership at their local civilian registry office (registro civil). Marriages need to go through a much longer and more expensive process in the courts, and, in the event you were married in the church, you’ll also need to go through a process with them as well.

In a marriage, unless you specifically design a prenup, your money is essentially shared and you’re both expected to use the means you have in order to maintain your shared lifestyle. This means that in the event of divorce, money matters can be messy, unless previously agreed upon. We’ve all seen the movies, we know how it goes.

On the other hand, civil unions do not abide by any laws when it comes to your money, meaning that in the event of a break up, neither one would be entitled to any kind of alimony, unless it was previously agreed upon.  Because of this, it may be suggested that both partners have separate bank accounts. It should be mentioned, however, that if a civil union wants to draw up a kind of pre-nuptial agreement, they can, and it would be honored if it should ever need to be.

3. Special circumstances at the work place

Special permission to be absent from work for example because of maternity or paternity leave, are available for both married couples and civil unions. In addition to this, the days off allowed for serious illness of a family member up to the 2nd degree of kinship are the same in both cases.

Spanish law stipulates 15 days of paid vacation for couples who get married, but not for civil unions.

Another fun topic! In the event that you or you partner dies, the rights given to the other are also a bit different.

If you are married, you are legally entitled to a widower’s pension as well as part of their inheritance.

As their civil partner, unless it was previously agreed upon through a will or other legal document, you wouldn’t be entitled to any of their inheritance. And in order to get the widow’s pension you need to prove you’ve been living together, uninterrupted for the last five years, and you need to prove you don’t make over a certain amount of money.

Their are not significant differences here, since the child’s birth certificate is enough to prove maternity or paternity of the child, and the rights inherent as their mother or father. As mentioned, both civil partnerships and marriages are allowed the maternity and paternity leave required by law.

In the event of a break up or divorce, if no custody agreement has previously been made, the judge is in charge of deciding the best circumstances for the child, as well as child support, should it be deemed necessary–for both marriages and civil unions.

If we refer back to the inheritance topic from above, it should be mentioned that in the event of the death of one partner, if they are not married, the surviving partner does not inherit their money by defect. In this case it would be the children.

Spanish law has changed to allow civil unions to adopt children just as married couples do.

To end on a fun note, let’s talk about taxes. Not much to mention here, just that civil partnerships may not file taxes jointly, while married couples can. Married couples are not obligated to, though, and some may find that filing jointly actually doesn’t benefit them. (It didn’t benefit me this year!)

All in all, deciding to become pareja de hecho or simply get married is a very personal decision. If you’re a bit nervous about going all out and getting married right away, becoming pareja de hecho may be the perfect option as it doesn’t imply much legal intertwined-ness but yet still gives you certain benefits for example, work and residency permission in Spain, as well as certain benefits in the event you or your partner fall seriously ill. Happy relationship-ing no matter what you choose!