Some of the most entertaining moments you will probably have in your first time abroad is when someone sheepishly asks you, “So…I saw this on a film…is it really like this in America?”

And it will hit you like a ton of bricks that what for you, living your life in the States was perfectly normal, has been projected over so many screens and speakers, that the entire world wants to know….

Sometimes these questions bring up stark cultural differences, and sometimes it is a chance to dispel stereotypes that aren’t true, or at least, aren’t always true. So here they are, the most frequently asked questions as an American abroad…

I can understand why especially Spanish people may have this concern, considering lunch for them is the biggest and most important meal of the day. Not in America. It usually consists of a sandwich of some sort and maybe some chips or side dish. As for peanut butter–I hated it as a child (this has since changed) and was shunned SO BADLY for it in elementary school. But yes, people eat this for lunch on the regular, especially children. And no, it has no nutritional value.

I don’t know if this is a midwestern thing, (maybe even just Wisconsin? We are the dairy state…), but I was force fed this as a child under the guise of the need for vitamin D and calcium. Bollox. All of it. The thought of it now makes me want to gag, and worse yet, I would sometimes add ice cubes to it! Side note–my dad still drinks a glass of milk with dinner. 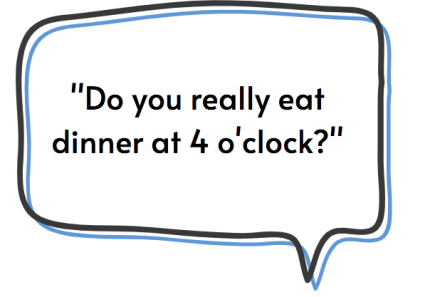 Also an understandable question since the average Spaniard sees foreigners, especially Americans and Brits starting a big meal between 4-6pm, when that’s their normal siesta time. For Americans, the normal range for dinner is from 5-8, with most people falling in the 6-7 range. I have to admit, I always used to go to my friend’s house after school because they ate super early and I wanted that Tombstone pizza real bad. Double dinner. No problem. 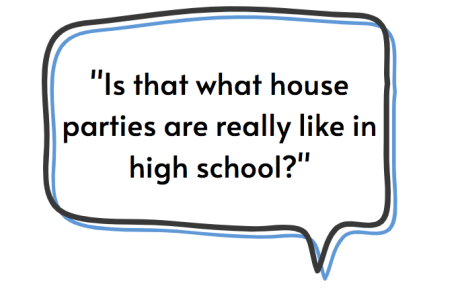 If you’re referring to every teen movie and/or series that ever existed–ie She’s All That, Ten Things I Hate about You, Mean Girls, Gossip Girl, One Tree Hill, etc, the answer is, yes, SOME high school parties were KIND OF like that. By kind of I mean that none of us were half as attractive or half as rich, so a normal “party” would mean ten or fifteen friends hanging out in someone’s basement whose parents weren’t home and whose older brother could score a six pack of Smirnoff ice. 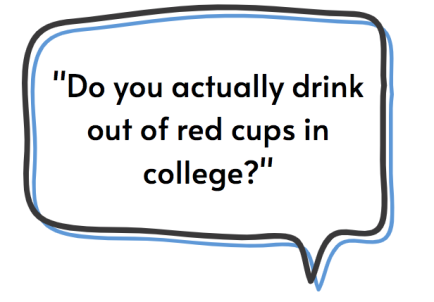 Honestly, yes, all the time. I never knew this was anything but normal until I lived abroad. Let’s just say all the non-Americans really enjoyed the novelty of holding a red Solo cup at our fourth of July party a few years ago. And also playing beer pong with them. 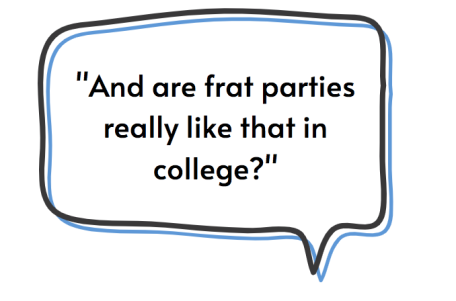 I hate to confirm a total cliché but…pretty much.

Let me say this as many times and as loudly as possible–COLLEGE IS F#$%^ING EXPENSIVE. A year at the PUBLIC university I went to costs around $27,000 per year–this includes all costs like rent, books, transport, and leisure–if you are a Wisconsin resident. If you come from another state or country, you are looking at $50,000 per year. That’s $200,000 to get a slightly-better-than-average, 4 year Bachelor’s degree.  You want to go somewhere like Harvard? You’re looking at about $70,000 dollars per year. 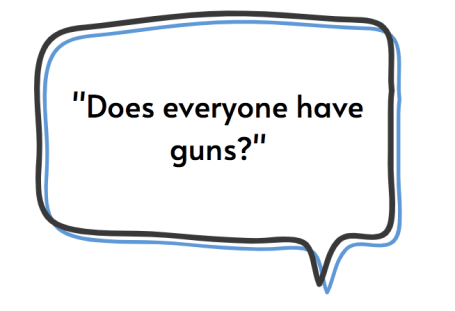 Short answer, no, not everyone. Short, also accurate answer–more people than you would think. I can really only speak for my family on this one, as I’ve been out of the States for almost 12 years now (in 2020), I don’t honestly know how many of my friends have guns for protection or otherwise. My dad has a couple of rifles he uses for hunting, and those are the only guys I’ve ever seen up close. This topic is tough for me, though, because I don’t see it as a stereotype as much as a real and deep-seeded believed prerogative by Americans that senselessly kills thousands each year.

I’ll just quote the stats here, which say that only about 20% of Americans consider themselves to be bilingual. I would love to know what percentage of that are first or second generation immigrants, who speak at least two languages because of their families and survival in the US–I’m guessing most of it. Although there has been remarkable improvement since I was in school, our foreign language programs, especially in early education, are pretty dismal. For whatever reason I have always been interested in languages, and signed up for after school Spanish classes when I was about 10. There were no official language classes offered until I was 13. In defense of a lot of people I know, most of my family and friends always say that they would “kill to be able to speak another language”, and wish the opportunity had been offered earlier in their lives, or, had been stressed as being of equal if not greater importance than other subjects in school, as it is seen here. The bottomline is that many Americans and Brits are too comfortable being able to get by with just English, but it isn’t *entirely* their fault.

There is no use denying the facts–Americans have a huge problem with obesity, and all of the crappy diseases that come with it. However, if there is one comment I can’t STAND from a Spanish person its, “Pero a que aquí la comida es muchísimo mejor?” (But, you have to admit that the food is so much better here, right?) WRONG. I love Spanish food, I won’t deny it. Gimme some gambas al ajillo, paella, salmorejo, tortilla…whatever it is, I love it. However, generalizing the American diet is a dangerous and impossible game to play. Yes, it may be difficult to come up with a “typical” American dish because our country is so large, (nearly 20 times the size of Spain), and has so many different influences, doesn’t mean that a) we lack traditional food or b) that all the food we eat is garbage. This stereotype is one of the biggest ones that was dispelled when my husband came to the States for the first time and stayed with my family. Each region, each state, each family, and ultimately each individual is different, and diet varies greatly among all of these lines. Don’t fall into the trap of believing that just because the American restaurants that arrive here serve crap, that’s what we all eat.

What other questions have you been asked as an American? (There are so many…) Did they offend you? Comment below with any and all anecdotes!

Just a small town Wisconsinite in a fiery love affair with a country that sometimes loves me back and sometimes smiles and winks as it gives me the middle finger. I’ve spent seven years in this constant back and forth and I’m still as enchanted as day one. But there’s always tomorrow. View all posts by Emily