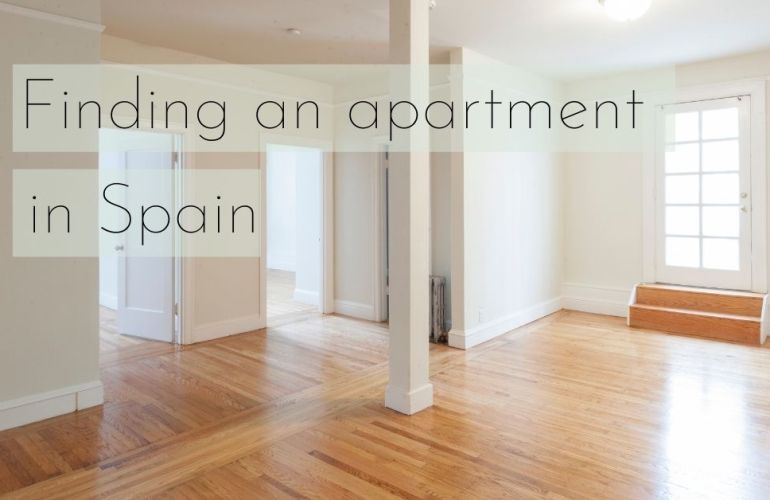 Finding an apartment anywhere can be a challenge. Trying get all of the things you want in the right location isn’t always a guarantee and usually ends in compromise, (we’ve all seen House Hunters, we know the drill).  Add to this not being able to speak the native language fluently or have any friends or acquaintances in the city, no constant income et voilá! You have your own personal hell for as long as it takes you to say OKAY I’LL TAKE THIS ONE I DON’T EVEN CARE.

This was me for my first three years in Spain as an auxiliar.  But it didn’t have to be. This post is for anyone about to embark on the search for an apartment abroad, but I have a special spot in my heart for those of you coming over for the first time. Here is a list of things to keep in mind to help you on your search for the perfect place.

1. Do not rent without seeing it in person.

Sometimes apartment searching can feel like a mad scramble and the minute you find one you like, its gone. This can lead to putting too much trust in someone you’ve never met, which usually ends in fraud.  If you see an apartment online that you absolutely are 100% sure you want, your best bet is to reach out to a friend you may have in the area to go and see it in person before signing or paying anything.  Do not send any money without first seeing the apartment and looking over the contract details. Some people prey on foreigners coming from abroad just wanting to find an apartment quickly, willing to do anything to reserve something. Don’t do it. Take your time, rent an Airbnb for a week and go to see apartments. You’ll find one, I promise.

2. Have an idea of the market

Anyone living in Barcelona right now can tell you rent prices are out of control, and anything available goes in a matter of hours. Landlords are realizing that the demand for apartments is high, and the supply is not, so Econ 101 tells us what happens. If this is the case in the city you are going to, you will want to know ahead of time. Use websites like Numbeo to help you get an idea for how much apartments are before you start looking. This can also be a great way to know what kind of prices you should be comfortable with. Don’t be taken advantage of just because you’re not from here–know your stuff!

If you are moving abroad alone, and don’t have much savings, or don’t have a job yet, you are going to need a room mate to survive. My first few years in Spain I loved having a room mate. There was always someone to grab a beer and a tapa with any given day of the week, to meet new people, or listen to how horribly my class went that day. I would also not worry about your room mate being native from the country you’re going to–I originally always wanted this but it is actually nice to be able to decompress after a full day with someone who literally and figuratively speaks your language. Facebook has tons of groups for finding room mates, and some pages like Badi can help you get connected with others looking for room mates.f2fdw2f

Look for expat groups in or around the area you are moving to.  These are good places to ask questions about rent prices and terms or conditions that might seem strange to you or could be quite normal. Or even the opposite, a good place for people to tell you to get out now because your landlord is a crook. A warning–some expat groups can be exceptionally harsh. Don’t take it personally!

5. Know what the initial blow will be

This is a good question to ask in an expat forum depending on your city, but I’ll explain briefly what you can expect in Spain.

In most places, you will be expected to pay up front two months rent–one for the first month, and one for the security deposit. If you live in a big city like Barcelona, there is a good chance that you will even have to pay two or three months of a security deposit up front as well.  In certain cities there could also be an agency fee (in Sevilla it is currently almost impossible to find an apartment without one), and that will be another month’s rent (that you’ll never see again). If your apartment hasn’t been inhabited in awhile, you will also need to pay to get the water, electricity, and internet up and running. (Are you following along on your calculator?) All in all, it is not unheard of to pay upwards of 3,000 euros when you first move in–depending on the cost of your apartment.

Can we just all agree that the city center of most places is usually the worst? Dirty, smelly, dark, and yet somehow super expensive. At least this is true of Barcelona. If you are looking for a place, I’d warn against neighborhoods like The Gothic, The Borne, Raval, or Barceloneta. You will pay significantly more and have to deal with all things that come with tourism like noise, trash, and those lovely smells I was talking about. The advantage of bigger cities is that the metro systems tend to make it very easy to get to the center when you want to, without having to pay the premium to live there.

As for Sevilla, you’ll probably want to live closer to the center. The Metro system isn’t as good as in Barcelona so getting in and out of the center from other places in the city isn’t quite as easy–though certainly not impossible. The best neighborhoods there are Alameda (alternative/hippy/trendy–lots of amazing restaurants), Santa Cruz (jewish quarter, slightly more touristy but extremely charming), Arenal (along the river near the bull ring and cathedral), Triana (almost a little “pueblo” of its own, just across the river), Porvenir (great for families, very close to Plaza España), in general, anywhere in the Casco Antiguo.

Obviously being close to your job is ideal but also keep an eye out for metro stops and bus stops, grocery stores, public hospitals, post offices, and gyms nearby. If you’re moving abroad you probably won’t have a car and you don’t want to spend all day on public transport to pick up the package of Reeses peanut butter cups someone sent from home.

In our recent apartment search in Sevilla we actually settled on an apartment just slightly outside of the center purely for this reason. Sometimes being inside the Casco Antiguo makes it more difficult to find bigger grocery stores and other daily stops nearby. Be on the lookout when you go to visit!

Things to ask about that you may take for granted and think they are included when they may not be:

8. Be careful with lower floors

Not only is the noise infuriating, but ground or first floor apartments facing the street are the easiest to break into. I wish I could say I was making this up but unfortunately I have multiple friends who have had terrible experiences with this. In addition, cockroaches are not unheard of in Spain, especially places near the coast and in the old historic centers, and the lower floors are usually the worst affected.

Electricity is much more expensive in Europe than in the States, (and recently has hit record highs), so more light means a lower electric bill, (and more Vitamin D!)

10. Leave your home country standards behind

I come from the States, where, as a portly Brit recently told me, “everything is bigger and better”. (His words, not mine). Apartments included. This, however, is not the case in many places in the world, including Spain. Understand that your idea of a spacious apartment will probably either cost you more than you earn in a month or not exist at all.  Accept it as a part of the experience!

Sites like Idealista, Habitaclia, and FotoCasa are great for looking for apartments and rooms, but don’t eliminate other options. Try finding Facebook groups in your city that advertise rooms and apartments, you may even be more likely to get a better deal or last minute offer here than with the bigger sites. Also, take a day to check out any postings in your local University if you have one. My first few years we always went to the bulletin board and took some numbers. Nothing to lose!

11. Be cool with compromise

You don’t need me to tell you that the perfect apartment doesn’t exist. We’ve all watched our fair share of HGTV to know that no one gets everything on their “must have” list for the price they want. Prioritize what is most important to you, without jeopardizing other aspects at the same time.

I would love to know about your experience or questions you have about moving abroad! What was it like? What would you have done differently? What are you most nervous about? Share your thoughts in the comments below!

Just a small town Wisconsinite in a fiery love affair with a country that sometimes loves me back and sometimes smiles and winks as it gives me the middle finger. I’ve spent seven years in this constant back and forth and I’m still as enchanted as day one. But there’s always tomorrow. View all posts by Emily

5 thoughts on “How to find an apartment in Spain”